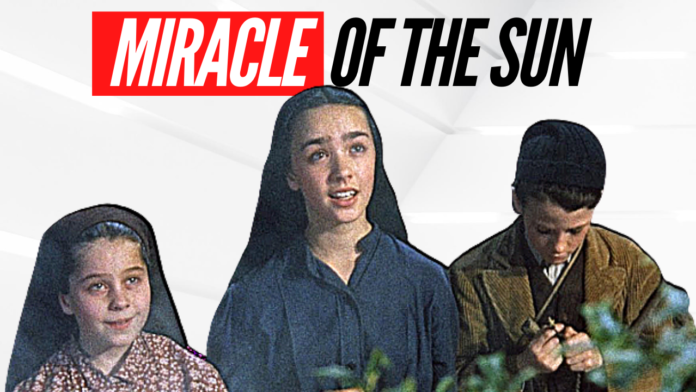 The Miracle of the Sun is a miraculous event witnessed by as many as 100,000 people on 13 October 1917 in the Cova da Iria fields near Fátima, Portugal. Those in attendance had assembled to observe what the Portuguese secular newspapers had been ridiculing for months as the absurd claim of three shepherd children that a miracle was going to occur at high-noon in the Cova da Iria on 13 October 1917.

According to many witness statements, after a downfall of rain, the dark clouds broke and the sun appeared as an opaque, spinning disc in the sky. It was said to be significantly less bright than normal, and cast multicolored lights across the landscape, the shadows on the landscape, the people, and the surrounding clouds.

The sun was then reported to have careened towards the earth in a zigzag pattern, frightening some of those present who thought it meant the end of the world. Some witnesses reported that their previously wet clothes became “suddenly and completely dry.”

Estimates of the number of witnesses range from 30,000-40,000 by Avelino de Almeida, writing for the Portuguese newspaper O Século, to 100,000, estimated by Dr. Joseph Garrett, professor of natural sciences at the University of Coimbra, both of whom were present that day.

The event was attributed by believers to Our Lady of Fátima, an apparition of the Blessed Virgin Mary to three young shepherd children in 1917, as having been predicted by the three children on 13 July, 19 August, and 13 September 1917. The children reported that the Lady had promised them that she would on 13 October reveal her identity to them and provide a miracle “so that all may believe.

According to these reports, the event lasted approximately ten minutes. The three children also reported seeing a panorama of visions, including those of Jesus, the Blessed Virgin Mary, and of Saint Joseph blessing the people.

Prayer for any Spiritual or Temporal Favour